Here at Shred Nations, we get all sorts of pressing questions regarding hard drives. While we may be experts in making sure your hard drive is properly destroyed, we also know a thing or two about the hardware itself. We thought this was a good opportunity to go over some of our most common hard drive FAQ’s (frequently asked questions).

Nearly everyone in the United States owns, or has access to at least one computer. In fact, according to the 2016 US Census, the number of Americans who have a computer in the home was roughly 89%.  But just like any electronic device, computers are subject to wear and tear, and the occasional malfunction.

What are the Main Types of Hard Drives?

There are realistically two types of hard drives currently dominating the marketplace. 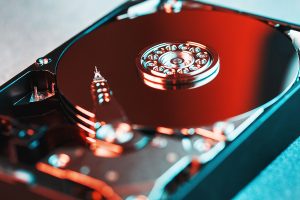 Which stands for Hard Disk Drive, this is the type of hard drive that most of us are familiar with. These are the types of drives that come standard in most desktops and laptops for roughly the past twenty years. These drives use spinning platters and a needle to digitally “write” data onto the magnetic surface of the platter. These drives are the most inexpensive and tend to be a little slower than their SSD counterparts.

Since these devices have moving parts when writing and reading data, many find them problematic for laptops. Sudden movements or drops can cause the hard drives to become damaged or inoperable. 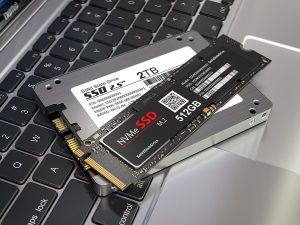 Which stands for Solid State Drive is a newer and much faster alternative to your traditional spinning platter hard drives. There are no moving parts in SSD’s, rather the information is digitally stored on an array of flash memory circuits. Think of it as a much bigger version of a USB memory stick.

Many modern computers and laptops have opted to integrate SSD’s in favor of older HDD’s. It’s widely considered to be faster, more durable, and more stable in the long run. The main downside tends to be cost, as well as a finite number of reads and writes available on the drive itself.

What is the Lifespan of a Hard Drive?

This can be a tricky question, since it really depends on the usage of the individual drive. The rule of thumb tends to be three to five years for an HDD and about five years for an SSD. This will, of course, depend on the wear and tear on the individual device. It’s not unheard of for lightly used drives to last upwards of ten years, while heavily used drives may only last a year or two.

What are Some Signs of a Hard Drive Failure? 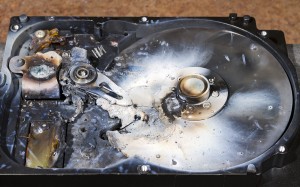 Fortunately, hard drives rarely crash out of the blue or without warning. That’s not to say that it can’t happen. It’s typically much easier to tell when an HDD is failing, due to the fact that there are moving parts within. Some of the telltale signs are loud noises, slow performance, overheating, and inability to retrieve files. This is why you’ll typically want to have any important files backed up.

SSD failures can be a little less obvious. They’ll often happen in the form of slow computer performance, inability to read and write files, programs freezing or crashing, and lastly the dreaded “blue screen of death”.

How Should I Backup My Hard Drive? 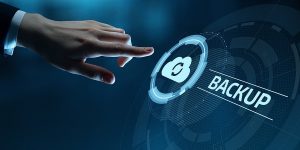 The industry standard for backing up data is called the 3-2-1 method. Simply put, this means you should have three copies of your data. The original and two copies.

Next, you should have two different media types to store that data on. In addition to what’s on your hard drive, you should have that information on something else. This could mean a USB flash drive, a physical disc, or even a separate external hard drive.

Lastly, and possibly most importantly, you should have at least one copy off site. In its most simple terms, it means don’t keep all your eggs in one basket. It won’t do you any good to take all those steps, and then lose your information due to a location-specific compromise like a fire or flood. Off site means putting it somewhere else entirely.

Many experts as of late have interpreted offsite to mean cloud storage. This option takes a two-handed approach. First, it eliminates the physical aspect of having a device that could be damaged. Secondly, it’s completely off site as it’s managed by a separate entity altogether. Cloud services are becoming one of the most convenient and secure methods of storing data.

What Should I do with a Failed or Inoperable Hard Drive? 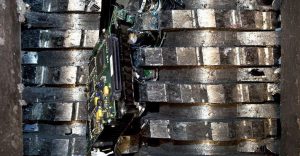 Secure and professional destruction is really the only way to safely dispose of a hard drive. As mentioned above, there are a variety of methods capable of retrieving data off failed hard drives. Just because you can’t access it, doesn’t mean someone else can’t. Even damaged drives can still contain usable data if someone knows what they’re doing.

There are a variety of methods of destruction from shredding to shearing, crushing to melting. Any of these methods will guarantee that the information contained within will be gone forever.

Hard drive destruction services ensure that the electronic devices were thoroughly destroyed. This renders them useless for data recovery. Shred Nations can help you decide what the best course of action is for your secure hard drive disposal project. We’ll make the process as easy as possible for you, and the environment.

Start the process by filling out the form, giving us a call at (800) 747-3365, or contacting us directly using our live chat. Afterward, you’ll receive a free, no-obligation quote from local providers.