All of a device’s data is stored on its hard drive, so, if a hard drive goes down, the rest of your ship sinks with it. This makes it essential you know all the warning signs to look for when it comes to failing hard drives.

Learn more in this video or the transcription below about hard drive lifespans, how hard drive failure happens, the signs and symptoms, and what to do if your hard drive is failing or has already failed.

A computer’s hard drive is where all its data is stored and at some point it will inevitably crash. Additionally, it can be from gradual wear and tear on internal components or a more external issue.

Spinning between 5,400–7,200 times per minute while a standard record player maxes out at 78 rpm, other parts of the drive like the motor that spins the hard drive platter itself can also fail, and so considering how much valuable data a drive holds it’s essential owners know the impending hard drive failure signs to look out for. 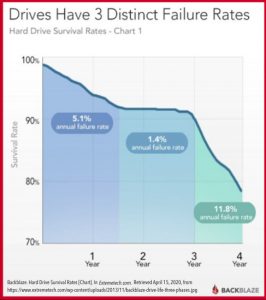 Based off past studies, hard drives have a steady decline in average lifespan over time with the largest failure rates between year 3 and 4.

If these numbers were to extend beyond year 4, the projected estimates would show roughly 50% of drives failing after year 6.

There will always be outliers like excessive heat and manufacturing defects causing hard drives to fail early while regular maintenance and a little bit of luck can keep them up and running longer, but the bottom line is that based on this data all hard drives will eventually fail.

There are a range of different causes for hard drive failure, including the infamous head crashes where the read-and-write head that hovers just nanometers above drive’s spinning platter touches and scratches its magnetic data-storage surface—in turn causing severe data loss.

Besides catastrophic head crashes though, other causes of hard drive failures can be both gradual and sudden:

Before a hard drive crashes there are typically signs and symptoms of an impending failure. Additionally, there are multiple ways you can tell when your hard drive is nearing the end of its lifespan, including:

What to Do When Hard Drives Fail 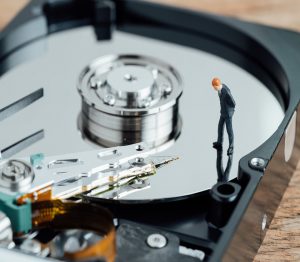 If the magnetic coating on a drive’s platter isn’t entirely destroyed after a scratch from the read-and-write head, data can sometimes be partially or fully recovered.

When a scratch happens, keeping the drive on and continuing to let the platter spin will cause even more damage. Additionally, specialized companies can recover the data by opening the hard drives in a class 100 clean room and repairing the components.

It’s important you don’t try to self-repair hard drives—exposing internal drive parts without a sanitized clean room can cause permanent damage via media contamination for example, and if the drive is eventually able to be restored to a point it can be started again it should only be used to immediately recover and back up the data on the drive.

After your hard drive fails, you can’t just throw it in the trash. Instead, it needs to be safely destroyed and disposed of to comply with both the EPA and state standards.

Has Your Hard Drive Failed or Do You Think It Will Soon?

At Shred Nations, we partner with a nationwide network of hard drive and other electronics disposal providers. Additionally, we help ensure no matter your location or destruction needs we can have you covered.

Get free quotes and join Allstate, Ford, Chipotle and the countless other companies and individuals who we’ve helped to find secure options for safely disposing their failed hard drives by filling out the form to the right, giving us a call at (800) 747-3365, or contacting us directly using our live chat.