According to the U.S. Census, it’s estimated that at least 92% of households have at least one computer. We all know that computers have hard drives, and hard drives need to be properly destroyed when they’ve outlived their usefulness. But what about the auxiliary devices like printers, scanners, and fax machines? Many people are unaware that these devices also have storage media within them, and the size of the storage capacity can vary greatly.

The storage within these devices isn’t usually as sophisticated as a hard drive, but almost all of these machines contain chips or circuits resembling that of a USB flash drive. Just like computers, these devices should be disposed of properly, to prevent the risk of critical data leakage.

Why Does a Printer Have Storage? 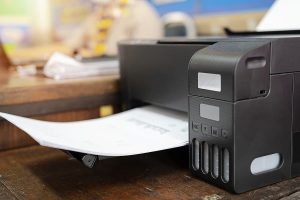 The simple answer to that question is convenience. Using printers as an example, nearly every printer manufactured over the last 30 years contains some form of storage media. When a print job is sent from the computer to the printer, the printer saves that job for efficiency. In the event your computer slows down or connection is interrupted, the print job can still be completed. Sounds good, right?

The danger with this is that the job stays on the device until another job “overwrites” the existing one. This is called a circular buffer. This storage loop goes in order, so depending on how often you use the device, it could take a long time for previous jobs to be overwritten. Every device is different in this regard, as some can hold a few dozen print jobs while others may hold a few thousand.

How Much Storage Do Printers & Scanners Contain? 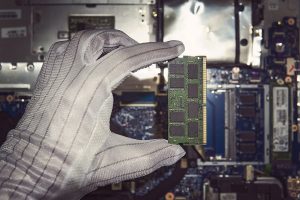 The answer to this question may be alarming, since many of us have dropped off printers and scanners as e-waste. We often do this without realizing that these machines very likely still have stored data on them. Depending on what these machines were used for, the data on them could be incredibly sensitive.

Based on a normal sized sheet of paper, without images, 1 megabyte can hold upwards of 500 documents. Multiply 500 by the number of megabytes and you’ll know how much your printer may be holding. Depending on how often you use your printer, that could be more than a year’s worth of documents. For even a single gigabyte, that’s potentially 500,000 documents.

Can You “Erase” the Storage on a Printer? 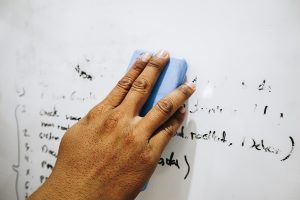 There are a few ways to “erase” the data on printers and scanners, but the only way to be sure is to have the device professionally destroyed. You know what you’ve used your printer or scanner for. So if you’ve printed things like tax returns, financial statements, or medical records, it’s possible that all that data could remain in the storage components.

Sometimes unplugging the device for a few minutes will be enough to erase the “volatile” or “short term” memory. For the “non-volatile” memory, you can try factory resetting the machine a few times, or sending through a few innocuous print jobs. However, if your printer is one that has a large memory capacity, that could mean a few thousand print jobs. Let’s face it, that’s a huge waste of time and paper.

Better yet, let the professionals make sure that the memory on these machines is destroyed. In most case we can even recycle the device for you once the destruction is complete. This way you can rest easy, knowing that you’re protecting your private information while also making sure your device isn’t becoming an environmental hazard.

Shred Nations has decades of experience in helping people nationwide dispose of hard drives and other sensitive storage media. It’s important to make sure you aren’t handing over old electronics that may put your data at risk. We can help you find the right service, at the right price. We have solutions for everyone, whether you have one device, or one-hundred.

Start the process by filling out the form, giving us a call at (800) 747-3365, or contacting us directly using our live chat. Afterward, you’ll receive a free, no-obligation quote from local providers.